Mafia Sounding, or rather: the mafia on the plate. In the past we have already dealt with the Italian sounding phenomenon, or the improper use of Italian references on food products that have nothing to do with our country. A nine-zero business that relies on the “hunger” (it is appropriate to say!) Of ‘made in Italy’ products in the world, but also on the disinformation of foreign consumers who, convinced that they are buying authentic delicacies from the Belpaese, they find fake foods of questionable quality on the table.

According to the most recent estimates, fake ‘made in Italy’ food develops a turnover of 100 billion euros all over the world: an impressive figure, even more when compared with the total value of exports of real Italian food products. (42 billion euros in 2018). The data, therefore, certify that every bottle of Prosecco DOC, every form of Parmigiano Reggiano, every jar of PDO peeled tomatoes (just to cite a few examples) have, in the world, at least two “fake copies”, whose label evokes a Italianity in fact non-existent and whose taste and flavor have very little to do with the original one.

Italian sounding is growing dramatically and it is estimated that its value has increased by over 70% in the last 10 years; moreover, 5 billion euros a year are illegally subtracted from the legal turnover, not counting the twenty thousand jobs lost every year (Confagricoltura estimates) and the three hundred thousand that could be generated by defeating food piracy (source: Coldiretti). It is certain that very little is being done on the tables of politics to protect the true ‘made in Italy’; we hope that the next representatives who will sit in the European Parliament will do their utmost in this battle. 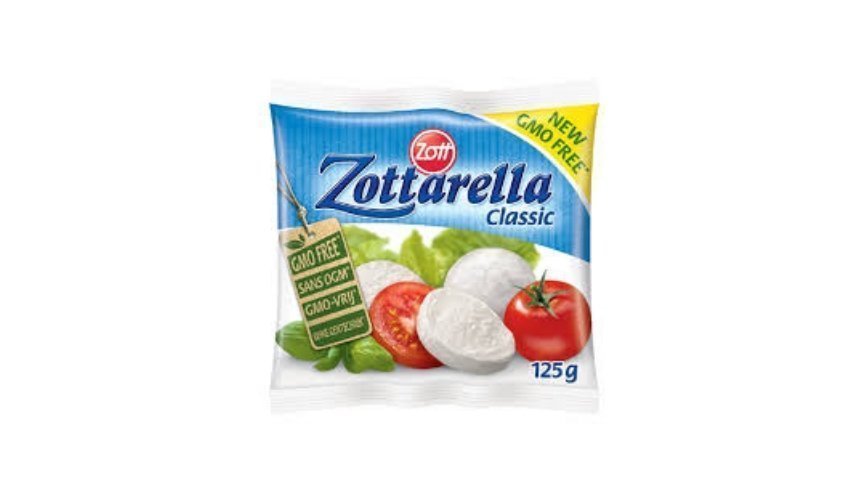 In a context that is worrying to say the least, there is a reason to smile and it concerns the names of fake Italian products around the world: in Australia you can taste Thai Pesto, an unlikely jumble of flavors of various kinds and dubious origins; the German version of mozzarella is called Zottarella, a product that has nothing of Italian, but it would not seem to be judging by the label; in Korea many believe that in Italy they eat … chapagetti al dente; around Europe it is possible to indulge in an aperitif based on Crisecco or Prisecco, flavored sparkling wines which, with skilful games of letters of the alphabet, evoke the noble and noble Italian Prosecco; also in the EU, strange round starchy products called taralli Don Maralli have been sighted, apparently Italian but which have only the tricolor of the Bulgarian flag, the nation in which they are produced.

The mafia on the label

That the term “mafia” is one of the main elements that, in the common foreign opinion, lead back to our country is also evident from the labels of fake Italian products. And it is precisely here that the imagination of the … magicians of the tarot is unleashed. Here are 5 representative products of Italian sounding with the mafia on the label, which we could define … mafia sounding. 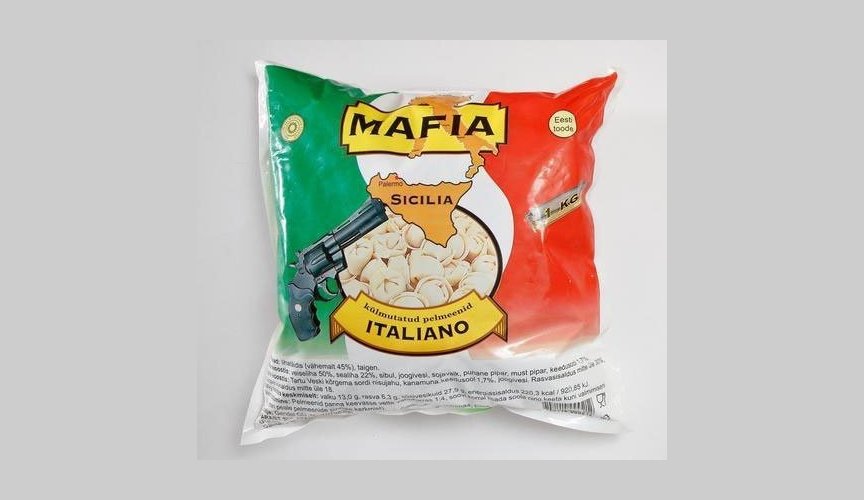 Let’s start with the ‘first’. Tricolor in the background, a gun with the barrel pointed at Sicily, written “Mafia” in plain sight and, a little further down, the word “Italian”, just to certify the origin … of the gun. A combination of bad taste, just like the pasta inside the package. Produced in the Baltic countries, it is an insult to our country and our culture. 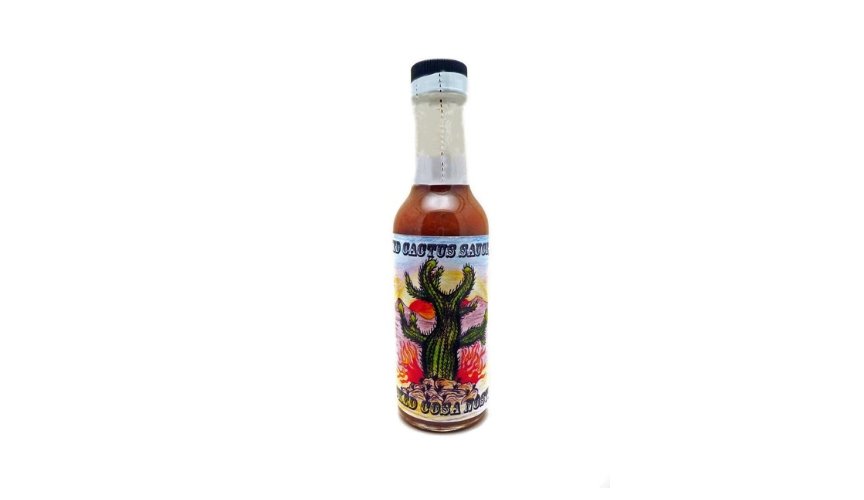 Some nefarious US producers apparently didn’t have a better name for their hot sauce. So they called it “Wicked Cosa Nostra”, and they even took the liberty of justifying their choice with the slogan “it’s terribly delicious”. Salsa and … humor made in the USA. 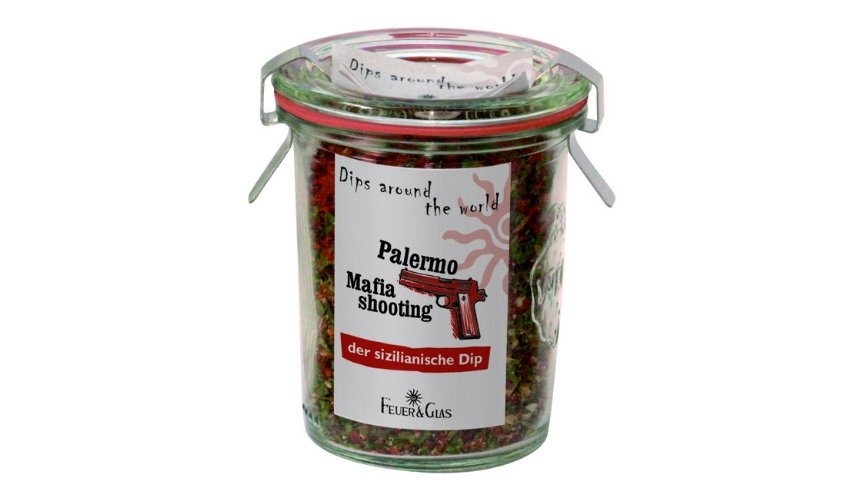 From Germany comes a mix of dry spices seasoned with water and olive oil “lively and tasty, just like southern countries like Italy are. So tasty that it can even induce ‘the family’ to betray their godfather”, as you can read on the website (link) of the manufacturer. We prefer not to comment.

Two-tone, black and gold packaging. The somewhat stylized image of a gloomy man smoking a pipe, with a hat and a raised collar. A large writing at the top “Caffè Mafiozzo gold” and, at the bottom, a slogan in our language: “the Italian style”. A few words for a very clear message: to associate two of the most important symbols of our country. The good one, coffee, and the bad one, the mafia, with the sole purpose of doing business. The idea comes from a Bulgarian company, which obviously has no idea what true Italian style is. 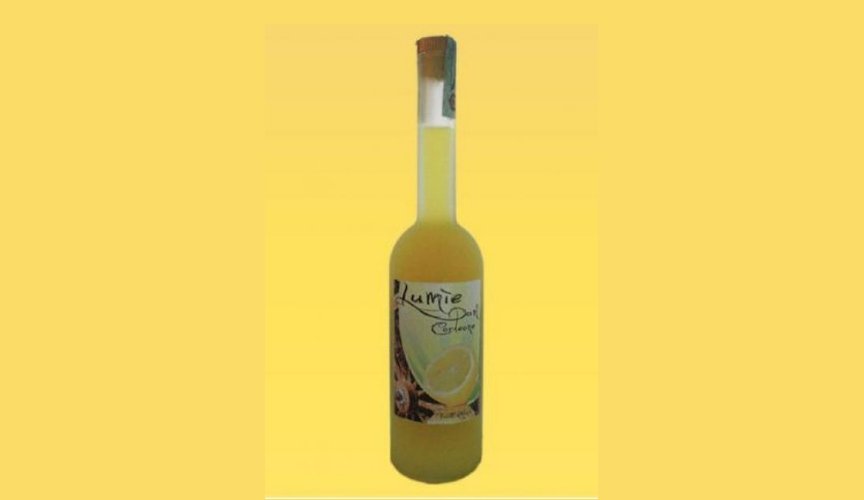 For the series “Sometimes we get hurt even by ourselves”, here are two proposals for the after meal. The bitter “Il Padrino” and the limoncello “Don Corleone”. Unlike the other fakes in our ranking, they are produced in Sicily! Just to spoil your digestion.

Mafia Sounding to be fought at any cost

We tried to tackle the problem of the mafia sounding by talking about it with sarcasm and irony, but we really struggle to hide our astonishment towards those who decide to make money on a terrible scourge such as that of the mafia. Unscrupulous businessmen who offend Italy, but also the victims of crime, their families and the police who fight every day to fight the mafia. On the occasion of the important Tuttofood fair, recently held in Milan, Coldiretti “paid homage” to President Conte with a basket containing a selection of fake ‘made in Italy’ products: a symbolic gesture to reiterate the need and urgency to fight the ‘Italian Sounding starting, we add, by the criminals who put the mafia on labels.

From Taiwan a great gesture of generosity during the coronavirus emergency