Bell Italia is the most reliable and affordable Italian wholesaler of consumer goods, since 2010 an irreplaceable reference point for thousands of wholesalers and retailers from all over the world. And today, this is confirmed by an official certification: the Rating of Legality

Rating of Legality: what it is

What is the Rating of Legality? It is a certificate issued by the AGCM (Antitrust Authority) in collaboration with the Ministries of the Interior and of Justice. The certificate recognizes and rewards companies that operate with honesty and social responsibility, but above all in compliance with all existing laws.

In Italy about 8,500 companies have obtained the Rating of Legality. A recognition that has allowed our country to climb the CPI ranking (Corruption Perception Index) in a short time, passing from late positions to the current 51st place out of 180 overall. A sign that legality and fairness are increasingly used and approved guidelines among the companies of the boot-shaped Country. And Bell Italia is no exception. 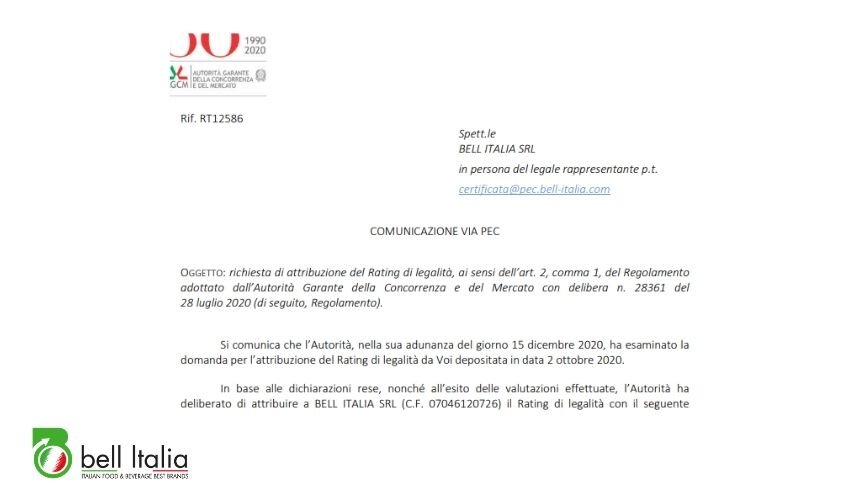 Bell Italia’s reliability, therefore, is now even more certified. To the esteem and trust that our customers put in us every day, is now added an official evaluation issued by a Government Agency that welcomes our way of doing business. A further confirmation of the right direction taken ten years ago, with the aim of bringing high-quality Made in Italy all over the world at affordable prices. But, above all, an extra certainty for Bell Italia’s customers and suppliers, who can count on a serious, professional and safe partner.

Bell Italia’s Rating of Legality: you don’t believe it? Ask us!

Having obtained the Rating of Legality fills us with pride and satisfaction. Bell Italia is a healthy and fair company, and to say it is not us, but none other than the Antitrust Authority. At the same time, this milestone represents an incentive to commit ourselves to our goals even more. We have ambitious growth objectives and we are sure that the future will hold us many, really many satisfactions, strictly in the spirit of Made in Italy!

Export of Italian products to the USA: Bell Italia obtains the FDA registration